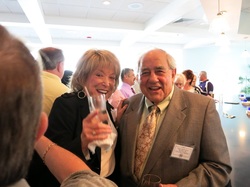 Eternal rest grant to Vincent, O Lord.
May his soul and the souls of all the faithful departed through the mercy of God rest in peace.

Following WW II, during which time he was a POW, he attended the University of Buffalo (Epsilon Chapter), pledged Alpha Phi Delta and had a successful career as a professional accountant. Vince was National President from 1968-1970 and also served as a National Housing Trustee, one of the forerunners of the Alpha Phi Delta Foundation. Vince and his son Jim, Epsilon '65 endowed an annual Alpha Phi Delta Scholarship. Many of us remember Vince at several recent conventions and at the Centennial Gala. Most recently, he was an inspirational mover behind the Naples Alumni Club.
In lieu of flowers, the family respectfully requests that donations be made to the Vincent J. Muffoletto Scholarship Fund of the Alpha Phi Delta Foundation.   If you would like to contribute to this fund, please click below:
You can also mail a check to:
Alpha Phi Delta Foundation, Inc.
P.O. Box 23188
Pittsburgh, PA 15222
Please note on the check that the donation is for the Vincent J. Muffoletto Scholarship Fund.