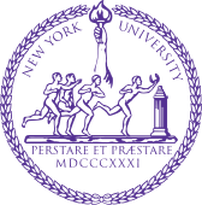 New York University (NYU) is a private, nonsectarian American research university based in New York City. NYU's main campus is located at Greenwich Village in Lower Manhattan. Founded in 1831, NYU is one of the largest private nonprofit institutions of American higher education.

NYU is organized into more than 20 schools, colleges, and institutes, located in six centers throughout Manhattan and Downtown Brooklyn, as well as more than a dozen other sites across the world, with plans for further expansion. According to the Institute of International Education, NYU sends more students to study abroad than any other US college or university, and the College Board reports more online searches by international students for "NYU" than for any other university.

Motto in English: To persevere and to excel