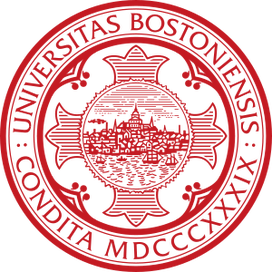 Boston University (most commonly referred to as BU or otherwise known as Boston U.) is a private research university located in Boston, Massachusetts. The university is nonsectarian, but is historically affiliated with the United Methodist Church.

The university has more than 3,800 faculty members and 33,000 students, and is one of Boston's largest employers. It offers bachelor's degrees, master's degrees, and doctorates, and medical, dental, business, and law degrees through eighteen schools and colleges on two urban campuses. The main campus is situated along the Charles River in Boston's Fenway-Kenmore and Allston neighborhoods, while the Boston University Medical Campus is in Boston's South End neighborhood. BU also operates 75 study abroad programs in more than 33 cities in over twenty countries and has internship opportunities in ten different countries (including the United States).

BU is categorized as an RU/VH Research University (very high research activity) in the Carnegie Classification of Institutions of Higher Education. BU is a member of the Boston Consortium for Higher Education and the Association of American Universities.

The university counts seven Nobel Laureates including Martin Luther King, Jr. (PhD '55) and Elie Wiesel, 35 Pulitzer Prize winners, nine Academy Award winners, Emmy and Tony Award winners among its faculty and alumni. BU also has MacArthur, Sloan, and Guggenheim Fellowship holders as well as American Academy of Arts and Sciences and National Academy of Sciences members among its past and present graduates and faculty.