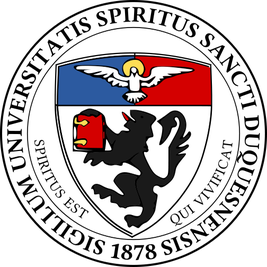 Duquesne has since expanded to over 10,000 graduate and undergraduate students within a self-contained 49-acre (19.8 ha) hilltop campus in Pittsburgh's Bluff neighborhood. The school maintains an associate campus in Rome and encompasses ten schools of study. The university hosts international students from more than 80 countries although most students — about 80% — are from Pennsylvania or the surrounding region. Duquesne is considered a research university with high research activity institution by the Carnegie Foundation for the Advancement of Teaching.

There are more than 79,000 living alumni of the university including two cardinals and the current bishop of Pittsburgh.

The Duquesne Dukes compete in NCAA Division I. Duquesne men's basketball appeared twice in national championship games in the 1950s and won the NIT championship in 1955.

Motto in English: It is the Spirit that gives life.