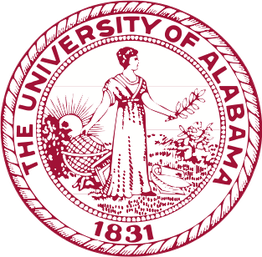 The University of Alabama (UA) is a public research university located in Tuscaloosa, Alabama, USA, and the flagship of the University of Alabama System. Founded in 1831, UA is one of the oldest and the largest of the universities in Alabama. UA offers programs of study in 13 academic divisions leading to bachelor's, master's, Education Specialist, and doctoral degrees. The only publicly supported law school in the state is at UA. Other academic programs unavailable elsewhere in Alabama include doctoral programs in anthropology, library and information studies, metallurgical engineering, music, Romance languages, and social work. The university is ranked first among public institutions and fourth out of all universities in the 2012–2013 enrollment of National Merit Scholars with 241 enrolled in the fall 2012 freshman class.

As one of the first public universities established in the early 19th century southwestern frontier of the United States, the University of Alabama has left a vast cultural imprint on the state, region and nation over the past two centuries. The school was a center of activity during the American Civil War and the African-American Civil Rights Movement. The University of Alabama varsity football program (nicknamed the Crimson Tide), which was inaugurated in 1892, ranks as one of 10 "winning-est" programs in US history. In a 1913 speech then-president George H. Denny extolled the university as the "capstone of the public school system in the state (of Alabama)," lending the university its current nickname, The Capstone.