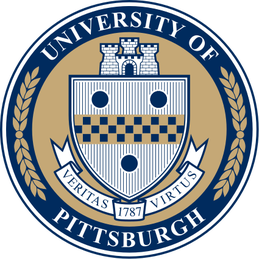 The University of Pittsburgh (commonly referred to as Pitt) is a state-related research university located in Pittsburgh, Pennsylvania, United States. It was founded on the edge of the American frontier as the Pittsburgh Academy in 1787, and evolved into the Western University of Pennsylvania by alteration of its charter in 1819. After surviving two devastating fires and various relocations within the area, the school moved to its current location in the Oakland neighborhood of the city and was renamed to the University of Pittsburgh in 1908. For most of its history Pitt was a private institution, until it became part of the Commonwealth System of Higher Education in 1966.

The university is composed of 17 undergraduate and graduate schools and colleges located at its urban Pittsburgh campus, home to the university's central administration and 28,766 undergraduate, graduate, and professional students. The university also includes four additional undergraduate schools located at campuses within Western Pennsylvania: Bradford, Greensburg, Johnstown, and Titusville. The 132-acre Pittsburgh campus comprises multiple historic buildings of the Schenley Farms Historic District, most notably its 42-story gothic revival centerpiece, the Cathedral of Learning. The campus is situated adjacent to the flagship medical facilities of its closely affiliated University of Pittsburgh Medical Center (UPMC), as well as the Carnegie Museums of Pittsburgh, Schenley Park, and Carnegie Mellon University.

The university has an annual operating budget of approximately $2 billion that includes nearly $900 million in research and development expenditures. A member of the Association of American Universities, Pitt is the fifth largest recipient of federally sponsored research funding among U.S. universities and is a major recipient of research funding from the National Institutes of Health. It is the second largest non-government employer in the Pittsburgh region behind UPMC. Pitt has been placed among the top public universities in the United States in both domestic and international rankings, and has been listed as a "best value" in higher education by multiple publications.

Pitt students have access to various arts programs throughout the campus and city, and can participate in approximately 350 student organizations. Pitt's varsity athletic teams, collectively known as the Pittsburgh Panthers, compete in Division I of the NCAA, primarily as members of the Atlantic Coast Conference.

Motto in English: Truth and Virtue