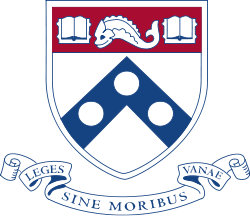 Benjamin Franklin, Penn's founder, advocated an educational program that focused as much on practical education for commerce and public service as on the classics and theology. Penn was one of the first academic institutions to follow a multidisciplinary model pioneered by several European universities, concentrating multiple "faculties" (e.g., theology, classics, medicine) into one institution. It was also home to many other educational innovations. The first school of medicine in North America (Perelman School of Medicine, 1765), the first collegiate business school (Wharton, 1881) and the first student union (Houston Hall, 1896) were all born at Penn.

Penn offers a broad range of academic departments, an extensive research enterprise and a number of community outreach and public service programs. It is particularly well known for its medical school, dental school, design school, school of business, law school, communications school, nursing school, veterinary school, its social sciences and humanities programs, as well as its biomedical teaching and research capabilities. Its undergraduate programs are also among the most selective in the country (approximately 10% acceptance rate). One of Penn's most well-known academic qualities is its emphasis on interdisciplinary education, which it promotes through numerous joint degree programs, research centers and professorships, a unified campus, and the ability for students to take classes from any of Penn's schools (the "One University Policy").

All of Penn's schools exhibit very high research activity. Penn is consistently ranked among the top research universities in the world, for both quality and quantity of research. In fiscal year 2011, Penn topped the Ivy League in academic research spending with an $814 million budget, involving some 4,000 faculty, 1,100 postdoctoral fellows and 5,400 support staff/graduate assistants. As one of the most active and prolific research institutions, Penn is associated with several important innovations and discoveries in many fields of science and the humanities. Among them are the first general purpose electronic computer (ENIAC), the Rubella and Hepatitis B vaccines, Retin-A, cognitive therapy, conjoint analysis and others.

Penn's academic and research programs are led by a large and highly productive faculty. Nine Penn faculty members or graduates have won a Nobel Prize in the last ten years. Over its long history the university has also produced many distinguished alumni. These include twelve heads of state (including one U.S. President), three United States Supreme Court justices, and Supreme Court justices of other states, founders of technology companies, international law firms and global financial institutions, university presidents, and eighteen living billionaires.

Motto in English: Laws without morals are in vain