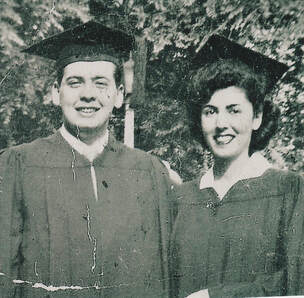 Messina was born and raised in Brooklyn, where he lived for nearly 70 years. He entered Brooklyn College at 16 and was indicted into Alpha Phi Delta days before he turned 17.

Joe Messina spent his career as an insurance company executive and attorney. He also served his community and New York City on many occasions.  Messina served on Brooklyn’s District 22 Community School Board for 16 years and in that role had the opportunity to hire his Beta Eta brother Ralph Brande as School Superintendent. Messina was the Democratic District Leader and State Committeeman of the 42nd Assembly District and served on New York City’s groundbreaking Campaign Finance Board.

Messina was especially proud in 1979 when his son Paul became his brother upon his induction into Theta Beta Chapter at NYU.

Joe Messina was preceded in death by his Alpha Phi Delta Sweetheart, his wife of 51 years, Victoria (pictured here). He is survived by his 3 children; Cathy, Joseph, and Paul, with 8 grandchildren and 3 great-grandchildren.
​
Alpha Phi Delta Foundation