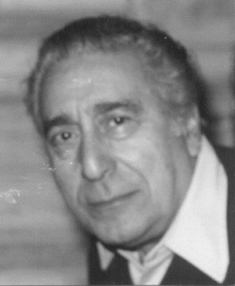 Joe Randazzo 1914 - 2016
On April 15 2016 one of our oldest, and long-active brothers over the years, Joseph W. Randazzo, Eta '34 passed away at the age of 101. Brother Randazzo was Convention regular for most of his nearly 82 years in the Fraternity. His most recent appearance was at the Centennial Convention in 2014. Brother Randazzo held many office as an undergraduate in his Chapter, and as an alumnus in his beloved Long Island Alumni Club. He was the "National Calligrapher" and "National Proofreader" of record, for many years. He will be missed greatly by his brothers.

OBITUARY
Born on July 21, 1914, Joseph W. Randazzo was inducted into Eta Chapter (City College of New York) in 1934. In 1936 he graduated with a B.S. in Education. Since teaching positions were practically nonexistent, he took a job as a proofreader and eventually worked in the Government Printing Office in Washington. Drafted into the Army in March 1943, he served in Europe for 30 months. After the war, he reestablished residence in New York and returned to his old trade as a printer-proofreader.
In 1962 he joined the Long Island Alumni Club. He served in all the offices and eventually took over the duties as editor of the Long Island Alumni Club Newsletter in 1972. His monthly newsy journal described in great detail the gastronomic offerings of the Roslyn Café, the frequent meeting place of the Club, along with updates on the doings of club members. He continued producing the Club’s Newsletter for some 30 years.

As a result of his endeavors, he was chosen Outstanding Alumnus in 1976. In 1978, he volunteered to lend his talents to Central Office and took on the responsibilities of National Calligrapher; hundreds of membership scrolls and charters were hand inscribed through the end of 1993. Brother Randazzo was the first recipient of the Fraternity's Vincent Larcy Communications Award in 1983. He served as an associate editor of The Kleos, and served as a proofreader of the first two editions, 1973 and 2000, of "The History of Alpha Phi Delta Fraternity."

Just a few weeks after his 100th birthday Brother Randazzo attended the Fraternity's Centennial Convention in nearby Harrisburg, Pennsylvania with members of his family. He was married to the former Ann Varvano; they had two daughters and four grandchildren.

If you would like to make a memorial donation to the Joe Randazzo Memorial Scholarship please click on the link below.