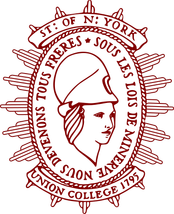 Union College is a private, non-denominational liberal arts college located in Schenectady, New York, United States. Founded in 1795, it was the first institution of higher learning chartered by the New York State Board of Regents. In the 19th century, it became the "Mother of Fraternities", as three of the earliest such organizations were established there. After 175 years as a traditional all-male institution, Union College began enrolling women in 1970.

The college offers a liberal arts curriculum across some 21 academic departments, as well as opportunities for interdepartmental majors and self-designed organizing theme majors. In common with most liberal arts colleges, Union offers a wide array of courses in arts, sciences, literature, and foreign languages, but, in common with only a few other liberal arts colleges, Union also offers ABET-accredited undergraduate degrees in computer engineering, electrical engineering, and mechanical engineering. Approximately 25% of students major in the social sciences; 9% in history; 10% in psychology; 11% in engineering; 10% in biology; 10% in the liberal arts; while some 5% design their own majors. By the time they graduate, about 60% of Union students will have engaged in some form of international study or study abroad.

Motto in English: We all become brothers under the laws of Minerva