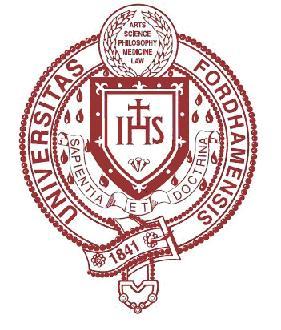 Fordham University is a private, nonprofit, coeducational research university based in New York City, United States. It was founded by the Catholic Diocese of New York in 1841 as St. John's College, placed in the care of the Society of Jesus shortly thereafter, and has since become an independent institution under a lay board of trustees, which describes the University as "in the Jesuit tradition."

Fordham is composed of ten constituent colleges, four of which are for undergraduates and six of which are for postgraduates. It enrolls approximately 15,000 students across three campuses in New York State: Rose Hill in the Bronx, Lincoln Center in Manhattan, and Westchester in West Harrison. In addition to these campuses, the University maintains a study abroad center in the United Kingdom and field offices in Spain and South Africa. Fordham awards the Bachelor of Arts, Bachelor of Science, and Bachelor of Fine Arts degrees, as well as various master's and doctoral degrees. The 2015 edition of U.S. News and World Report lists Fordham as a "more selective" national university and ranks it 58th in this category.

Motto in English: Wisdom and Learning