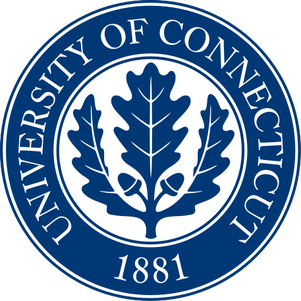 The University of Connecticut (UConn) is a public research university in the U.S. state of Connecticut. UConn was founded in 1881 and is a Land Grant and Sea Grant college and member of the Space Grant Consortium. The university serves more than 30,000 students on its six campuses, including more than 8,000 graduate students in multiple programs.

UConn is one of the founding institutions of the Hartford, Connecticut/Springfield, Massachusetts regional economic and cultural partnership alliance known as New England's Knowledge Corridor. UConn is a member of Universitas 21, a global network of 24 research-intensive universities, who work together to foster global citizenship.UConn is accredited by the New England Association of Schools and Colleges.

UConn was founded in 1881 as the Storrs Agricultural School, named after two brothers who donated the land for the school. In 1893, the school became a land grant college. In 1939, the name was changed to the University of Connecticut. Over the next decade, social work, nursing, and graduate programs were established, and existing schools of law and pharmacy were absorbed into the university. During the 1960s, the University of Connecticut Health Center was established for new medical and dental schools. John Dempsey Hospital opened in Farmington in 1975.