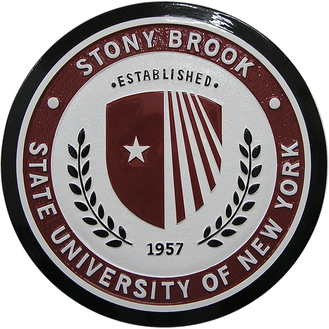 The institution was founded in 1957 in Oyster Bay as State University College on Long Island. What would become the university moved to Stony Brook in 1962. Since its establishment in Stony Brook, the university has expanded to include more than 200 major buildings with a combined area of more than 11 million gross square feet across 1,454 acres of land. In 2001, SUNY Stony Brook was elected to the prestigious Association of American Universities, joining four private universities (Cornell, Columbia, NYU, and Rochester) and one public university (SUNY Buffalo) elsewhere in its state. It is also a member of the larger Universities Research Association for which its president Samuel Stanley is a council president.

The university owns the Stony Brook University Medical Center, co-manages the Brookhaven National Laboratory, in 2005 acquired land for a Research and Development Park adjacent to its main campus, and has four business incubators across the region. The university has a regional economic impact of over $4.6 billion annually accounting for nearly 4% of economic activity in eastern Long Island and research expenditures that have surpassed the $200 million mark annually.

Stony Brook is the largest single-site employer in Long Island. 24,500 students are enrolled at the main campus and it employs over 3,200 faculty and 13,500 staff.

Its athletic teams, nicknamed the Seawolves, are members of the America East Conference and the Colonial Athletic Association competing at the Division I level of the NCAA since 1994.