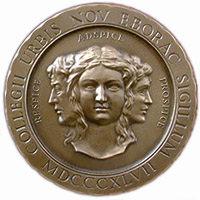 CCNY was the first free public institution of higher education in the United States and is considered the flagship campus of the CUNY public university system. The college accounts 10 winners of the Nobel Prize among its alumni, the latest being Harlem native John O'Keefe.

Motto in English: Look behind, look here, look ahead