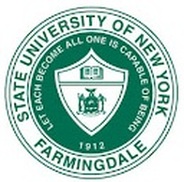 Founded in April 1912, Farmingdale State College, SUNY is the oldest public institution of higher education on Long Island. The founding of the College was originally proposed by State Assemblyman John Lupton of Mattituck in 1909. Lupton Hall, which houses the departments of Chemistry and Physics as well the School of Engineering Technology, now bears his name.

Farmingdale State College has gone by many different names over the years; here's the full list:

Motto: Let each become all one is capable of being

Athletics: Division III member of the NCAA, and competes as members of the Skyline, ECAC, CTC Conferences and NJAC Conference