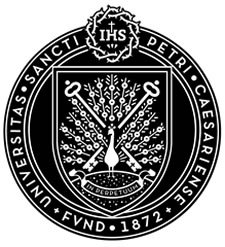 Its college mascot is the Peacock (the women's sports teams are called the Peahens), and its sports teams play in the Metro Atlantic Athletic Conference, of which it is a founding member.

The school is located on a 15 acre (61,000 m2) campus just south of Journal Square, and is 2 miles (3 km) west of New York City. Evening and weekend classes are offered in Jersey City, Englewood Cliffs, and South Amboy.

Motto in English: For the Greater Glory of God