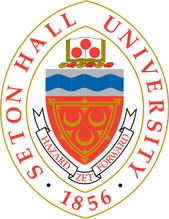 Like many Catholic universities in the United States, Seton Hall arose out of the Plenary Council of American Bishops, held in Baltimore, Maryland in 1844, with the goal of bringing Catholicism to higher education in order to help propagate the faith. The Diocese of Newark had been established by Pope Pius IX in 1853, just three years before the founding of the college, and it necessitated an institution for higher learning. Seton Hall College was formally founded on September 1, 1856 by Archdiocese of Newark Bishop James Roosevelt Bayley, a cousin of President Theodore Roosevelt. Bishop Bayley named the institution after his aunt, Mother Elizabeth Ann Seton, who was later named the first American-born Catholic saint.