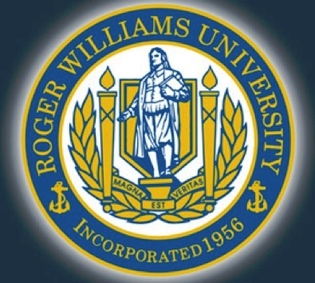 Roger Williams University, commonly abbreviated as RWU, is a private, coeducational American liberal arts university located on 140 acres in Bristol, Rhode Island, above Mt. Hope Bay. Founded in 1956, it was named for theologian and Rhode Island cofounder Roger Williams. The university has no religious affiliation.

The university’s operations date to 1919, when Northeastern University opened a branch campus in the YMCA building in Providence, Rhode Island. In 1940, the YMCA Board of Directors took over the school and the YMCA Institute granted its first associate’s degrees in 1948. In 1956, the Institute received a state charter to become a two-year, degree-granting institution under the name of Roger Williams Junior College. During the 1960s, Roger Williams College began granting bachelor’s degrees. Needing a larger campus, the college purchased 80 acres of waterfront land and moved its main campus to Bristol in 1969. (RWU continues to operate a branch campus in Providence.) In 1989 new president Dr. Natale A. Sicuro initiated the Roger Williams Plan for the 90s, and became concurrently the president of the newly established Roger Williams School of Law and, in 1992, led the name change of Roger Williams College to Roger Williams University. RWU celebrated its 50th anniversary in 2006.

Motto in English: Truth is Mighty