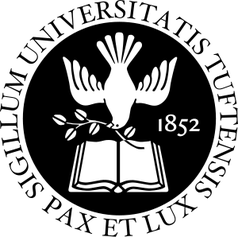 Tufts University is a private research university located in Medford/Somerville, near Boston, in the U.S. state of Massachusetts. The university is organized into ten schools, including two undergraduate programs and eight graduate divisions, on four campuses in Massachusetts and the French Alps. The university emphasizes active citizenship and public service in all of its disciplines and is known for its internationalism and study abroad programs. Among its schools is the United States' oldest graduate school of international relations, The Fletcher School of Law and Diplomacy.

Tufts College was founded in 1852 by Christian Universalists who worked for years to open a non-sectarian institution of higher learning. Charles Tufts donated the land for the campus on Walnut Hill, the highest point in Medford, saying that he wanted to set a "light on the hill." The name was changed to Tufts University in 1954, although the corporate name remains "the Trustees of Tufts College." For more than a century, Tufts was a small New England liberal arts college. The French-American nutritionist Jean Mayer became president of Tufts in the late 1970s and, through a series of rapid acquisitions, transformed the school into an internationally renowned research university. It consistently ranks among the nation's top schools.

Motto in English: Peace and Light