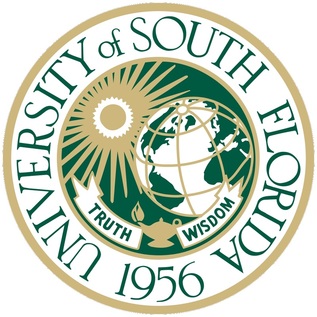 The University of South Florida, also known as USF, was the first independent state university conceived, planned, and built during the 20th century. Former U.S. Representative Sam Gibbons was instrumental in the school's creation when he was a state representative and is considered by many to be the "Father of USF."  Though founded in 1956, the university was not officially named until the following year, and courses did not begin until 1960. The university was built off Fowler Avenue on the site of Henderson Air Field, a World War II airstrip. In 1957, the Florida Cabinet approved the name "University of South Florida." At the time, USF was the southernmost university in the state university system. In 1962, the official USF mascot was unveiled as the "Golden Brahman." In the late 1980s, the mascot evolved into the "Bulls."

The university grew under the leadership of John Allen, who served as its first president from 1957 until his retirement in 1970. During this time, the university expanded rapidly, due in part to the first master's degree programs commencing in 1964. Allen was known for his opposition to college sports in favor of an environment more academically-centered. Allen's ultimate legacy was to be the first person to build a modern state university from scratch: "As a completely new and separate institution, the University of South Florida became the first new institution of its kind to be conceived, planned and built in the United States in the 20th century." Today the John and Grace Allen Administration Building, named after the university's founding president and his wife, houses vital Tampa campus departments including Student Affairs, the Admissions Welcome Center, and the Controller's Office.

In 1970, USF opened its university's medical school, School of Nursing, and first-ever Ph.D program. Work was done at time to strengthen the St. Petersburg campus, while opening new satellite campuses in Sarasota and Fort Myers.