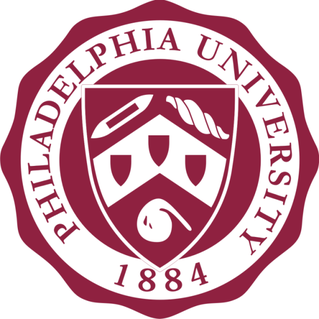 Philadelphia University (PhilaU), founded in 1884, is a private university in the East Falls neighborhood of Philadelphia, Pennsylvania, United States. The student body has about 3,500 students. Academic programs are divided among the College of Architecture and the Built Environment; the Kanbar College of Design, Engineering and Commerce; and the College of Science, Health and the Liberal Arts; the School of Continuing and Professional Studies; coursed are also offered via PhilaU Online. Philadelphia University awards bachelor's degrees, master's degrees and doctoral degrees.

At the 1876 Centennial Exposition, local textile manufacturers noticed that Philadelphia's textile industry was falling behind its rivals' capacity, technology, and ability. In 1880, they formed the Philadelphia Association of Manufacturers of Textile Fabrics, with Theodore C. Search as its president, to fight for higher tariffs on imported textiles and to educate local textile leaders. Search joined the board of directors of the Philadelphia Museum and School of Industrial Art, thinking it the perfect partner for his plans for a school, and began fundraising in 1882. In early 1884, Search himself taught the first classes of the Philadelphia Textile School to five students at 1336 Spring Garden Street. The school was officially opened on November 5, 1884. In 1942, the school was granted the right to award baccalaureate degrees and changed its name to the Philadelphia Textile Institute (PTI). In 1949, having decided to break its ties with the museum, PTI moved to its present site in the East Falls section of Philadelphia. In 1961, the school changed its name again, to Philadelphia College of Textiles and Science. In 1999, The Board of Trustees voted to change the College’s name to Philadelphia University, or PhilaU for short, on July 13, 1999.