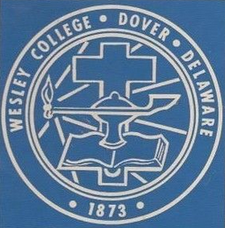 Wesley College is an American private, co-educational, liberal arts college, located in Dover, the capital of Delaware. The institution was founded in 1873 as a preparatory school called Wilmington Conference Academy. It became a two-year college in 1918, and was renamed the Wesley Collegiate Institute. The institution conferred its first four-year degrees in 1978. It also has a Dover Air Force Base campus.