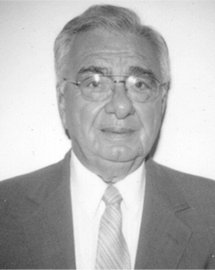 Angelus Joseph Creston was born on May 17, 1927, in Pittsburgh, Pennsylvania, in the borough of Swissvale. He graduated from Swissvale High School in 1945 and entered the Navy during the Second World War. His total years of service including active duty and the Naval Reserves was ten. In 1951 he graduated from Duquesne University with a degree in Business Administration. He was inducted into Alpha Phi Delta on December 7, 1949.

Brother Creston’s career included: Production Engineer at the Union Switch and Signal Company; owner and manager of a restaurant; Production Engineer for Westinghouse Nuclear and RCA; and Component Buyer and Planning Engineer for Westinghouse Nuclear, Electrical. He retired in 1990 and annually spends six months in Palm Harbor, Florida and six months in Pittsburgh.

During his Presidency, Creston oversaw the establishment of a revised Constitution for the Fraternity in 1978, during a “Constitutional Convention” held during that year’s Annual Meeting of the National Council. He noted in later interview in The Kleos that, “I would like to be remembered as the President who led by example and prepared Alpha Phi Delta for a new era.”

In 2000, Brother Creston generously made a $10,000 contribution to the Scholarship Fund of the Alpha Phi Delta Foundation establishing the annual scholarship given in his name. His main focus is to stimulate our alumni to better serve Alpha Phi Delta.

Brother Creston, a brother since December 7, 1949, and our oldest living Past National President, passed away August 11, 2022. Brother Creston's family asks that in lieu of flowers, donations in Joseph Creston's memory be made to the Alpha Phi Delta Foundation by clicking here.