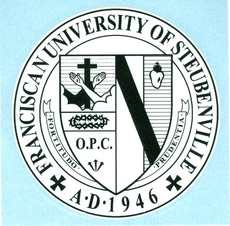 Franciscan University of Steubenville is a Catholic institution located in Steubenville, Ohio, 37.4 miles west of Pittsburgh, Pennsylvania. The school (originally named the College of Steubenville was founded in 1946 by the Franciscan Friars of the Third Order Regular. In 1974, Fr. Michael Scanlan, T.O.R., became President and began a series of major reforms to restore the school to its Catholic heritage. In 1985, the University changed its name from "College of Steubenville" to "University of Steubenville," and finally to "Franciscan University of Steubenville." Students are encouraged to join in faith households, small groups of students whose members study, recreate, and pray with one another. Typically, these student groups are attached to a particular dormitory on campus and are centered on particular devotions or charismatic gifts. In 2011, there were 43 active households. There is one nationally recognized fraternity, though not recognized by the school, Alpha Phi Delta. There is one nationally recognized sorority active on campus, Theta Phi Alpha. It is a historically Catholic Fraternity.

The campus is known for its liturgies, retreats and spiritual talks. Many students make a weekly commitment to Eucharistic adoration, and masses are well-attended. Masses have standing room only, even on weekdays. The Works of Mercy Program places students shoulder-to-shoulder with the poor and marginalized in inner city and rural communities. Over breaks, students volunteer to help others and preach in the United States and in countries such as Ecuador, Haiti, Jamaica, and Thailand. Students join the pro-life group, Students for Life, while others sign up for evangelization and Christian outreach activities spearheaded by the Student Life Office, households, and other campus groups.

Motto in English: Fortitude and Prudence