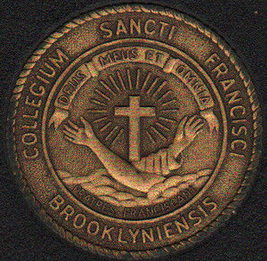 St. Francis College, often referred to as St. Francis or SFC, is a private, coeducational college located in Brooklyn Heights, New York, in the United States. The campus comprises five interconnected buildings, occupying half of a city block in Downtown Brooklyn. It was founded in 1859 by friars of the Order of Servants Franciscans, a Franciscan order, as the St. Francis Academy and was the first private school in the Roman Catholic Diocese of Brooklyn. St. Francis College began as a parochial all-boys academy in the City of Brooklyn and has transformed into a small liberal arts college that has 19 academic departments which offer 72 majors and minors.

St. Francis College is a predominantly undergraduate institution, yet does have graduate programs in accounting, project management and psychology. St. Francis has been ranked nationally and regionally by Forbes magazine, Washington Monthly and U.S. News and World Report as one of the top baccalaureate colleges. St. Francis is set in an urban environment and is considered a commuter college. As of 2013, there are 2,900 undergraduates (10% part-time) and 66 graduates (45% part-time). The student to faculty ratio is 18:1 and 43.6% of classes have 20 or fewer students. The 2,900 students that attend St. Francis College come from over 80 countries. St. Francis College has been ranked by the New York Times and Forbes as one of the more diverse colleges in the United States.

Motto in English: My God, My All