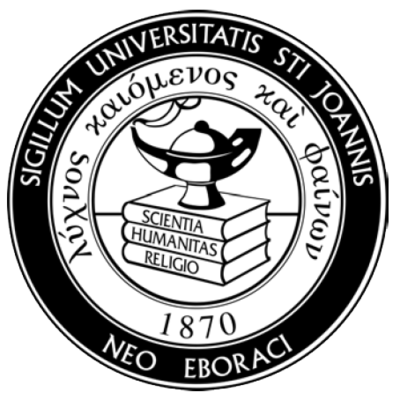 St. John's University (SJU) is a private, Roman Catholic, coeducational university located in New York City, United States. Founded by the Congregation of the Mission (C.M., the Vincentian Fathers) in 1870, the school was originally located in the neighborhood of Bedford–Stuyvesant in the borough of Brooklyn. Beginning in the 1950s, the school was relocated to its current location to Utopia Parkway in Hillcrest, Queens. St. John's also has campuses in Staten Island, Manhattan, and Rome, as well as a graduate center in Oakdale, New York. A campus in Paris opened in the Spring of 2009. The school is named after Saint John the Baptist.

St. John's University was founded in 1868, by the Vincentian Fathers of the Roman Catholic Church in response to an invitation by the first Bishop of Brooklyn, John Loughlin, to provide the poor youth of the city with an intellectual and moral education. St. John's University was originally founded as the College of St. John the Baptist at 75 Lewis Avenue, in Bedford-Stuyvesant, Brooklyn. The foundations of the first building were laid in the summer of 1868, and the building was opened for educational purposes September 5, 1871. Beginning with the law school in 1925, St. John's started founding other schools and became a university in 1933. In 1954, St. John's broke ground on a new campus in Jamaica, Queens, on the former site of the Hillcrest Golf Club. The following year, the original school of the university, St. John's College, moved from Bedford-Stuyvesant to the new campus. The high school, now St. John's Prep, took over its former buildings and later moved to its present location in Astoria, Queens. Over approximately the next two decades, the other schools of the university, which were located at a separate campus at 96 Schermerhorn Street in Downtown Brooklyn, moved out to the new campus in Queens. The last of the schools to relocate to Queens would move there in 1972, bringing an end to the Downtown Brooklyn campus of the university.