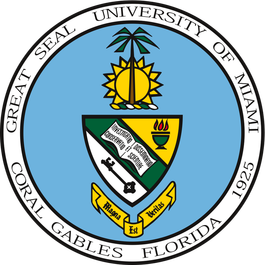 The University of Miami (informally referred to as UM, U Miami, Miami, or The U) is a private, nonsectarian university located in Coral Gables, Florida, United States. As of 2012, the university currently enrolls 15,613 students in 12 separate colleges, including a medical school located in Miami's Civic Center neighborhood, a law school on the main campus, and a school focused on the study of oceanography and atmospheric sciences on Virginia Key. These colleges offer approximately 115 undergraduate, 114 master's, 51 doctoral, and two professional areas of study. Over the years, the University's students have represented all 50 states and close to 150 foreign countries. With more than 13,000 full and part-time faculty and staff, UM is the sixth largest employer in Miami-Dade County.

Research is a component of each academic division, with UM attracting $346.6 million per year in sponsored research grants. UM offers a large library system with over 3.1 million volumes and exceptional holdings in Cuban heritage and music. UM also offers a wide range of student activities, including fraternities and sororities, a student newspaper and radio station. UM's intercollegiate athletic teams, collectively known as the Miami Hurricanes, compete in Division I of the National Collegiate Athletic Association, and its football team has won five national championships since 1983

Motto in English: Great is the truth