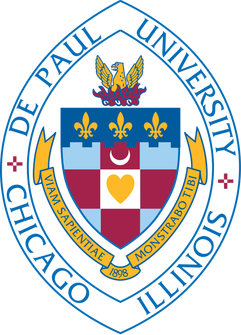 DePaul University is a private university in Chicago, Illinois. Founded by the Vincentians in 1898, the university takes its name from the 17th-century French priest Saint Vincent de Paul. In 1998, it became the largest Catholic university by enrollment in the United States. Following in the footsteps of its founders, DePaul places special emphasis on recruiting first-generation students and others from disadvantaged backgrounds.

DePaul's two main campuses are located in Lincoln Park and the Loop. The Lincoln Park Campus is home to the Colleges of Liberal Arts and Social Sciences, Science and Health, and Education. It also houses the School of Music, the Theatre School, and the John T. Richardson Library. The Loop campus houses the Colleges of Communication, Computing and Digital Media, and Law. It is also home to the Kellstadt Graduate School of Business, which is part of the nationally ranked Driehaus College of Business.

Motto in English: "I will show you the way of wisdom."