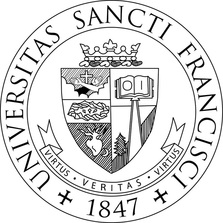 Saint Francis University (SFU) is a four-year, coeducational Catholic liberal arts university in Loretto, Pennsylvania. It was founded in 1847 and conducted under the tradition of the Franciscan Friars of the Third Order Regular. The university is situated on 600 acres in the forests and farmland of Loretto. Located in Loretto, Pennsylvania, Saint Francis University enrolls approximately 1,832 undergraduate students (of whom, 40.7% are male and 59.3% female) and 617 graduate students. The University offers 25 undergraduate majors and 7 graduate fields of study (including Physical Therapy, in which the University awards a doctorate) to its students. The University maintains an average graduation rate of 69.9%. Saint Francis University has 22 men's and women's sports teams and competes in Division I of the National Collegiate Athletic Association. The current president of the University is Rev. Malachi Van Tassell, T.O.R., Ph.D. Mount Assisi Friary, formerly the residence of industrialist Charles M. Schwab, home to the friars who staff the university.