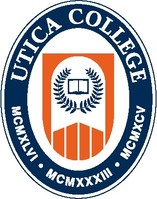 UC is officially mentioned in Syracuse's Charter, Article 1, Section 3: "Utica College shall be represented by the President, appointed ex officio, and by the dean of the college, and another representative selected by the college."