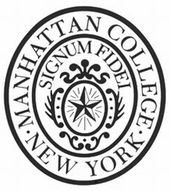 Manhattan College is a private, independent, Roman Catholic, Liberal Arts College located in the Bronx, New York City, United States. After originally being established in 1853 by the Brothers of the Christian Schools (De La Salle Christian Brothers) as an academy for day students, Manhattan College was officially incorporated as an institution of higher education through a charter granted by the New York State Board of Regents.

U.S. News and World Report lists Manhattan as one of the top 20 colleges in the Regional Universities North category. In addition, Manhattan consistently ranks high in the return on investment survey by Payscale.com (a self-reported survey), placing 24th on the 2013-2014 Payscale College Return on Investment rankings.