58 Scholarships were awarded to deserving recipients at the 2019 National Convention at the DoubleTree in Harrisburg, PA.

The Scholarship Fund is a division of the Alpha Phi Delta Foundation Inc. a 501(c) (3) charitable corporation.  Scholarship funds are maintained separately from the general funds of the Foundation.  Scholarships are awarded when a designated fund’s total reaches $10,000.  A fund can be started with any amount as seed funding.  The Scholarship Trustees are: Charles Fiore, Esq. (Chairman), Neil Anastasio (Co-chairman), Nicholas Franki (Co-chairman), Peter Gaudiuso (Treasurer), Anthony Barbieri, Paul Fabrizio, John Hadgkiss, Raymo Santilli, Jack Consiglio, Ronald Sme, and Anthony Thomas.  Award winners are selected based on scholastic achievement, financial need and fraternal or community service.  Below are the award winners in attendance at the 2019 National Convention: 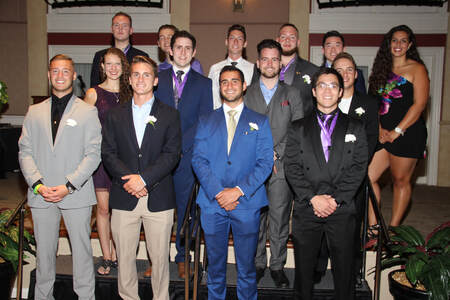 Anthony Carfang Award  ($5,000)     Established by the 36th National President and current Foundation Chairman.  He is the all-time leading financial donor to the Alpha Phi Delta Foundation.
Vincent Maimone
This outstanding student won the Carfang Award last year, and is now in his fourth year of a combined BS/MBA program.  At Epsilon Beta (LaSalle University), he is entering his second year as chapter president.  Four times Vincent sported a 4.0 GPA for a semester, and has a 3.86 overall GPA.  As an aspiring CPA, he is described as demonstrating “exemplary leadership” by his faculty advisor.  He is a collegiate scholar and a member of the International Business Honor Society.   Winning this highest honor in consecutive years has never been accomplished.
Stanley Raffa Award  ($2,500)     Established by the 30th National President and former Scholarship Chairman.
Emma Weimer
Entering Georgetown University working toward a master’s degree in global health, Emma is a two time winner of an APD scholarship.  She is the granddaughter of Brother Buccalo from West Virginia University ( Pi ).  She graduated Simmons University Honors College with a 3.8 GPA. 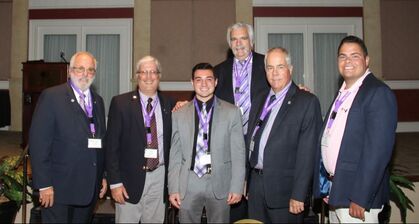 ​John J. Hadgkiss Centennial Scholarship ($2,000)     Funded by Beta Rho alumnus John Hadgkiss, Scholarship Trustee.
Tyler Spreng
Tyler is the vice president of Beta Lambda chapter (St. Francis University).  He is entering his junior year with a 3.8 GPA as a health science major working toward a career as a physicians’ assistant.  Tyler is the captain of the ice hockey club and holds a university Founders Scholarship

Anthony & Stella Barbieri Award  ($2,000)   Established by Brother Anthony & Rosina Barbieri in honor of his parents.
Sean Durkin
Now attending Cornell University pursuing his MBA, Sean is a former president of Delta Theta (Marist College).  He graduated with a 3.5 GPA with a degree in Finance, Economics & Business Administration.  He is the current president of the Delta Theta Alumni Association and a repeat scholarship award winner.

Pittsburgh Alumni Club Award  ($1,500)
Steven DeMartis
Studying special education at Pace University (Gamma Iota), Steven is hoping to pursue a master’s degree and enter education administration as a career goal.  He has a 3.5 GPA and is a repeat scholarship winner.  Steven’s faculty advisor says “he has amazing leadership qualities”.

North Jersey Alumni Club Award  ($1,500)     Honoring Americo Faruolo, member of Beta Xi chapter and the NJAC.
Katherine Fafara
Katherine is a repeat scholarship winner and is the daughter of PNP Al Fafara.  She attends Rutgers University as a pre-veterinary major and is entering her senior year with a perfect 4.0 GPA.  Katherine has received multiple scholarships from several organizations and has been named the Alpha Zeta student of the year.

Brother Camillus Casey Award  ($1,000)     Honoring former National Chaplain Bro. Camillus Casey
Michal Hickerson
Michal is the chapter president at Epsilon Epsilon (Farmingdale State College- State University of New York) and is an aeronautical science major.  His career goal is to become a professional pilot.  He is on the President’s List and maintains a 3.6 GPA entering his junior year.

Felix Infausto Scholarship  ($1,000)     Established by his widow Clara Infausto in her will.  Bro. Infausto was inducted into Epsilon chapter in 1929.
Rigo Griggs
Rigo is the son of a 9-11 first responder and attends the State University of New York-New Paltz (colony).  He is a double major in accounting and international business.  He is pursuing his master’s degree and hopes to become a CPA.  Rigo is also a member of the Italian Honor Society.

Lillian Anastasio Family Scholarship  ($1,000)     Established by her children, including Theta Beta alumnus and APD Scholarship Trustee Neil Anastasio.
Cory Redington
Cory is the chapter president at Stockton University (Gamma Mu) entering his senior year.  He has a 3.7 GPA and is a psychology major.

Long Island Alumni Club John Pasta Award  ($1,000)    Established by the LIAC in honor of the 7th Grand Consul.
Samuel Bifulco
Samuel is a repeat scholarship winner and attends Touro Law School.  At Epsilon Gamma (St. Joseph’s College), he was a triple major.  He is active in local government and politics.

Paul J Sciullo II Memorial Award   ($1,000)     An American hero and Psi brother, Paul was killed in the line of duty as a Pittsburgh police officer.
Christine Mellick
Christine is the granddaughter of Psi brother Richard Mellick.  She is going to be a junior at John Carroll University in the fall, and will be pursing an MA and PhD in theology in the future.

Richard Rau Scholarship Award ($1,000)     In honor of the late Richard Rau, brother at St. Francis College (NY).
Daniel Statile
Daniel is a repeat scholarship winner and attends Marist College (Delta Theta).  He is a senior marketing major with a 3.5 GPA who hopes to start a career in the sports industry.

Military Scholarship  ($1,000)     Established by, and in honor of, the military veterans of Alpha Phi Delta.
Joshua Aubel
An ROTC member at Penn State University (Chi), Joshua is a senior engineering major and aspiring pilot.  He maintains a 3.7 GPA while working on chapter activities to improve alumni communication.

Vincent & James Muffoletto Award   ($1,000)     Established by the 29th National President and his son.
Dominic Maguire
Dominic is a philosophy major entering his junior year at Franciscan University (Beta Theta).  He is the vice president of his chapter and hopes to attend law school.  His GPA is a fine 3.6.

Perciavalle Family Scholarship  ($1,000)    Created by Psi alumnus (Duquesne University) Frank Perciavalle who was one of the first scholarship winners in 1979.
Timothy Radwanski
A Penn State engineering student, Timothy is entering his junior year with a 3.5 GPA.  He is the philanthropy chairman at Chi chapter.

Youngstown Alumni Club Donald “Red” Nolfi Award  ($1,000)     Established in honor of Red Nolfi, the first Beta Omicron (Youngstown State University) president and a guiding force for area alumni.
Matthew Nicol
Matthew is a repeat scholarship winner from Beta Lambda (St. Francis University).  He graduated as a political science major with a 3.6 GPA and will be attending Penn State Law School in the fall.  He holds numerous honors and was a Founders Scholarship winner at St. Francis.

A. Joseph Creston Award  ($1,000)     Established by the 34th National President A. Joseph Creston.
Cooper Deck
A Chi (Penn State) graduate now attending Utica College for his MBA, Cooper hopes to become a sports broadcaster.  He served as chapter vice president and his professor said “he is one of our best, brightest and most involved students”.  He graduated with a 3.7 GPA.

Joseph and Janet Caldarella Family Award   ($1,000)   Established in recognition of the positive impact APD has had on their family, and  in memory of Salvatore Caldarella.
Joseph Sansone
Joseph is entering his junior year at Rowan University (Beta Phi) where he serves as the chapter vice president.  He has a 3.8 GPA and is a business management major.

Panella Family Scholarship  ($1,000)     Established by late Brother Leon Panella and family.  Leon was a Scholarship Trustee and served as a Foundation Director.
Azmain Chowdhury
Azmain is a repeat scholarship winner from Beta Iota (Utica College).  He holds multiple academic honors and is entering his senior year as a cyber security major with a 3.6 GPA.

Fabrizio Family Award  ($1,000)     Established by Scholarship Trustee Paul Fabrizio and family.
Jared Pavlosky
This repeat scholarship winner is a nursing major at St. Francis University (Beta Lambda).  Jared is active on many campus and chapter committees and has a 3.4 GPA

Mancusi Family Award  ($1,000)     Created by 52nd National President Chris Mancusi to honor Alberto & Angelina Mancusi as well as their relatives in Ischia, Italy.
Ryan Kwiecinski
A repeat scholarship winner, Ryan is a senior marketing major at Manhattan College (Beta Beta).  He is a Presidential Scholar and maintains a 3.3 GPA.

Dr. Albert Zanzuccki Beta Lambda Award  ($1,000)     Established  by the alumni of Beta Lambda chapter (St. Francis College, PA) in honor of their long time moderator Dr. Albert Zanzuccki .
Aidan Sweeney
As president of the Inter-Fraternity Council, Aidan is entering his senior year at St. Frances University (Beta Lambda).  He is a strategic communications major and has a 3.6 GPA.

Anthony Sallo Memorial Award  ($500)    Established by his many APD friends, Anthony was a member of Psi chapter at Duquesne University.
Richard Mellick, Duquesne University.   He is a graduate of the Duquesne Honors College and is pursuing his MBA and eventual law degree.

The Santo J. Barbarino Award   ($500)    Created by the Scholarship Trustees in honor of late trustee’s contributions to scholarship.  A past National President, he also served as District Governor and editor of the Kleos.   He was a beloved educator and this award is presented annually to an undergraduate brother who has successfully overcome significant challenges to his academic career.
Justin Matthews
Justin is entering his junior year at Stockton University (Gamma Mu).  He hails from Egg Harbor City, New Jersey and is a business major hoping to work in the banking field.  He has a 3.6 GPA and has attained the Dean’s List.

Rocco A. Sutera Scholarship  ($500)     Created by a gift in the will of Beta Eta (Brooklyn College) alumnus Rocco Sutera.  He served as Chairman of the Long Island Alumni Club John Pasta Award prior to its merger with the National Scholarship Fund.
Michael Barone, Epsilon Epsilon (Farmingdale State College – State University of New York)

The Scholars Award   ($500)     Established by the generous contributions of past Alpha Phi Delta Scholarship recipients and their sponsors.
Viktoria Kramer,  Ross University of Veterinary Medicine 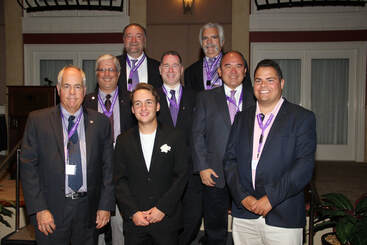