Every great event, every new era, every new school of thought or human endeavor in the history of the world, occurred because the need for it arose. It was so with Alpha Phi Delta: unalterable forces, recognizing the dire necessity for its existence led to its inception.

THE SEVEN FRIENDS. The large number of students of Italian descent that have populated colleges by the latter half of the 20th century were not commonly present in the early years of the 20th century. Thus, when a young Italian freshman, Cesidio A. Guarini, began his studies at Syracuse University in 1911 found only one other fellow Italian student: Ferdinand F. DiBartolo. They became good friends with common hopes and dreams as Americans. Then in fall of 1912, Anthony T. Frascati and Nicholas Frunzi, freshmen, met and became friends with Guarini and DiBartolo. The following year, in fall of 1913, Otto Gelormini, Dominic T. Ciolli and Joseph Cangiamila, all freshmen, became part of this small groups of friends.

FORMING IL CIRCOLO ITALIANO. This band of seven friends soon began to feel the necessity for campus activity as a group, and on November 5, 1913 at the home of Professor Charles W. Cabeen (head of the department of Romance Languages), Il Circolo Italiano of Syracuse University was formed. Ferdinand DiBartolo was elected its first president.

IMPRESSING THE CAMPUS. In that era, an organization existed at Syracuse University called the Cosmopolitan Club. The club served to gather students of different nationalities. The Cosmopolitan Club, as parts of its activities, would host “National Nights” — these were nights on which members of a specific ethnic group would be asked to host an evening of entertainment and dining based around their country of origin. On February 7, 1913, Il Circolo Italiano, at the invitation of the Cosmopolitan Club, hosted an Italian National Night. The event was a huge success — and received attention not only from the University but from the city of Syracuse. 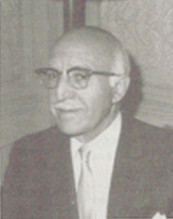 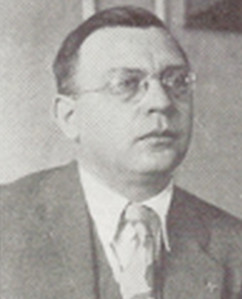 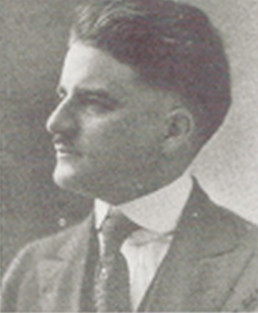 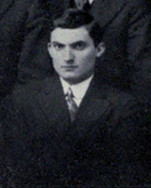 AN IDEA. After this event, our seven men — while gladdened by the wonderful success of the event — were saddened at the realization that graduation would soon break up this band of brothers. It was at this time that Nicholas Frunzi suggested to the other six men the idea of forming a fraternity. The other six members were enthusiastic about the idea. Over the coming months and into the fall of 1914, the seven men — acting on the idea of Nicholas Frunzi — developed plans for such a fraternity.

THE FIRST LEADER. Nicholas Frunzi was chosen as the first President of Alpha Phi Delta. The constitution, ritual, pin, coat of arms, charter, banner, motto, pledge oath, whistle and handshake were all decided upon at their first few weekly meetings.

RELATIONSHIP WITH THE UNIVERSITY. The one problem the group faced in these early days was recognition by the University. Ferdinand DiBartolo was chosen to head a committee to seek University recognition. The committee (composed of brothers DiBartolo, Guarini, and Cangiamila) met with Dr. James R. Day, Chancellor of the University to seek approval for Alpha Phi Delta to become a campus fraternity.

The brothers made their case to Chancellor Day on the need for having an Italian Fraternity on campus to meet the needs of the students excluded from the other fraternities. Chancellor Day made clear that he disagreed with the need to form an Italian fraternity on campus; he did not think that it could ever attract more than a handful of men. When all seemed lost, Cesidio Guarini, with his last bit of courage spoke:

“Chancellor, I must correct the statement of my Brother DiBartolo. We come here to advise you that Alpha Phi Delta is already organized and we are united by an oath.”

The details of the number of members and their progress in developing the organization was then made known to the Chancellor, who was impressed. “Well, Gentlemen,” Chancellor Day replied, “there was no necessity for you to come at all.” The Chancellor meant that the men already had what they desired: a brotherhood. He then gave his support to the idea. With that Alpha Phi Delta became part of the Syracuse University community.

BECOMING NATIONAL. Had the story ended there, it would be a nice tale of a small group of students coming together to form a local fraternity for themselves to overcome the exclusion they experienced from the regular social life in a turn of the century University setting. However, we know that Alpha Phi Delta is a national fraternity — here is how that came about:

AT COLUMBIA UNIVERSITY. Similar to the experience of the men at Syracuse, a group Italian students at Columbia University, in New York City, formed an Il Circolo Italiano group on the campus. Soon after that group was formed, they realized what the men from Syracuse had realized: with the end of college days, their friendships and close bonds would end. So, the group at Columbia had similar realization of the need for a fraternity.

SIGMA GAMMA PHI. In May of 1915, this matter was brought to the membership of Il Circolo Italiano; but the idea of forming a Italian fraternity was voted down. Four of the members of Il Circolo Italiano however, thought quite differently. In fall 1915, these four close and staunch friends Ernest DeMuria, Salvatore LaCorte, William Liccione and Anthony Pascarella decided to organize a fraternity on their own. They quickly got support and encouragement from university administrators; the fraternity they founded was Sigma Gamma Phi Fraternity. It was founded by an oath sworn in November 1915.

BIRTH OF THE NATIONAL FRATERNITY. Nicholas Frunzi of Alpha Phi Delta transferred to Columbia University in January 1916. He quickly made friends with the brothers of Sigma Gamma Phi. Soon, correspondence started between the two fraternities. Frunzi suggested the two groups amalgamate. A merger meeting was held in June 1916 at Syracuse University. Since the Syracuse fraternity was founded earlier, its name, Alpha Phi Delta was adopted. Syracuse was declared the Alpha Chapter and Columbia the Beta Chapter.

FRATERNAL SPIRIT. In the first showing of national fraternal spirit, the men from Syracuse rallied around Salvatore LaCorte of Beta, and elected him as the first Grand Consul (National President) of Alpha Phi Delta. William Liccione of Beta was elected Grand Quaestor (National Treasurer). They were elected unanimously along with Otto Gelormini of Alpha who was elected Grand Tribune (National Secretary).

The procedures followed by the founding fathers at Syracuse and Columbia remain traditional for all of our Chapters:


1. The quick efforts to obtain university permission to organize.
2. The involvement with the university faculty.
3. The second effort (after one failure) of Beta Chapter in spring 1915.
4. The compromise shown by the two groups in merging.
5. The members involvement in extracurricular activities.