December 12: A Fraternity Day of Observanace 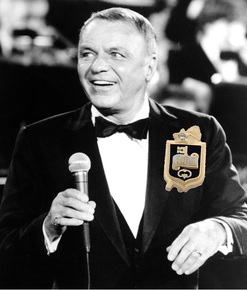 Sinatra's Fame and Achievements: Frank Sinatra established himself as most successful Italian-American singer in history achieving 134 top 40 (and 58 top 10) hit songs between 1940-1980. In his career, he likewise succeeded in the producing many successful albums -- 165 of them, selling over 400,000,000 to date. He appeared, also, in score of movies and TV specials. He has won multiple Academy Awards, Grammy Awards and Golden Globe Awards.

About Sinatra's Birthday and Alpha Phi Delta: In 2016, the National Council established Fraternal Days of Special Observance — days which have special meaning to our Brotherhood. One of those special days is Brother Frank Sinatra's Birthday, on December 12. On that day it would be proper for Alpha Phi Delta men to wear a white carnation or engage in some other action or activity in observance of the special nature of the day. Perhap even playing some Sinatra tunes -- and there are so many to choose from!

Biography. Francis Albert Sinatra (December 12, 1915 - May 14, 1998) was born in an upstairs tenement at 415 Monroe Street in Hoboken, New Jersey. He was the only child of Italian immigrants Antonino Martino "Marty" Sinatra (May 4, 1892 – January 24, 1969), the son of grape growers from Lercara Friddi, and Natalina "Dolly" Garaventa (December 26, 1896 – January 6, 1977), daughter of a lithographer from Genoa. The couple had eloped on Valentine's Day 1913, and married in a civil ceremony in Jersey City, New Jersey. For more about Brother Sinatra's life, click here.

A Frank Sinatra Photo Gallery: Inside and Outside of Alpha Phi Delta

U2's Bono 1994 Tribute to the Legacy of our Brother, Frank Sinatra

TRANSCRIPT: The best tribute to Francis Albert Sinatra was given in 1994 the leader of the band U2, Bono, in his presentation of a Grammy Lifetime Achievement Award. Here is what Bono said about our late Brother Frank:

"Frank never did like rock and roll And he's not crazy about guys wearing earrings either But .... rock and roll people love Frank Sinatra because Frank has got what we want: swagger and attitude; he's big on attitude Serious attitude, bad attitude Frank's the Chairman of the Bad Rock and roll plays at being tough but this guy, well, he's The Boss The Boss of Bosses The Man The Big Bang of Pop I'm not gonna mess with him, are you?

"Who's this guy that every city in America wants to claim as their own? This painter who lives in the desert, this first-rate, first-take actor This singer who makes other men poets Boxing clever with every word Talking like America Tough, straight-up, in headlines Comin' through with the big stick, the aside, the quiet compliment Good cop, bad cop, all in the same breath You know his story 'cause it's your story Frank walks like America -- cocksure!

"It's 1945 and the U.S. Cavalry are trying to get their asses out of Europe, but they never really do They're part of another kind of invasion AFR -- American Forces Radio Broadcasting a music that'll curl the stiff upper-lip of England and the rest of the world Paving the way for Duke Ellington, the big band, Tommy Dorsey And right out in front -- Frank Sinatra His voice as tight as a fist Opening at the end of a bar Not on the beat, over it, playing with it, splitting it like a jazz man, like Miles Davis Turning on the right phrase and the right song Which is where he lives, where he lets go, where he reveals himself His songs are his home and he lets you in But you know that to sing like that you've gotta have lost a couple of fights To know tenderness and romance you've gotta have had your heart broken
"People say that Frank hasn't talked to the press, they wanna know how he is, what's on his mind But you know Sinatra's out there more nights than most punk bands Selling his story through the songs Telling and articulate in the choice of those songs Private thoughts on a public address system Generous

"This is the conundrum of Frank Sinatra Left and right brain hardly talking Boxer and painter, actor and singer, lover and father, bandman and loner Troubleshooter and troublemaker The champ who would rather show you his scars than his medals He may be putty in Barbara's hands But I'm not gonna mess with him, are you?

"Ladies and gentlemen, are you ready to welcome a man heavier than the Empire State, more connected than the Twin Towers, as recognizable as the Statue of Liberty, and living proof that God is a Catholic! Will you welcome the King of New York City, Francis Albert Sinatra!"