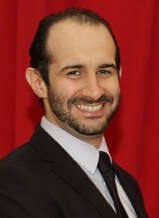 SALVATORE A. FLAGIELLO
55th National President (2020-present)
Salvatore Flagiello was inducted into our Gamma Rho Chapter (Baruch College) on April 9th, 2006. In his Chapter, Brother Flagiello held the positions of Treasurer and President, along with serving on the rush, social, and philanthropic committees. In 2007, his first full year as an undergraduate, Brother Flagiello was named Outstanding Undergraduate. Sal graduated from Baruch College with a Bachelor of Science degree in Actuarial Science in 2009.

After graduation, he wanted to immediately get involved on a National level becoming an Assistant District Governor in the New York City District. One of the first projects that he embarked upon after graduation turned out to be one of his greatest accomplishments, when he reactivated the Delta Epsilon Chapter at John Jay College. His biological brother, Angelo Flagiello, saw the impact Alpha Phi Delta had on his brother’s life, and he wanted to be a part of it. Together, with the help of Gamma Rho and alumni in the area, an initial class of six men was inducted at Delta Epsilon in fall 2009. In 2010, Brother Flagiello was awarded the honor of being New York City District’s Outstanding Alumnus because of his work with this group, but he knew his job was far from complete. He received an Expansion Award for his efforts with that group. In 2013, Delta Epsilon grew to over 60 active members and they were awarded the Fraternity’s Outstanding Chapter Award (which they would go on to win multiple times). After the success of that project, Sal tried to involve himself in every expansion project he could, which would later lead to his accomplishments as the Vice President for Expansion.

Brother Flagiello served as District Governor in the New York City area from 2011-2017. During this time he oversaw up to 16 entities at one time as the district flourished and eventually grew large enough to be split into several districts. While holding this position, Brother Flagiello made sure to keep his finger on the pulse of all the entities, undergraduate and alumni, and kept open lines of communication between them and the rest of the National Fraternity. The NYC District was given the honor of being the recipient of the Outstanding District award in 2013 under Brother Flagiello. During this time he also served as an assistant to John Russo, National Convention Chairman, and helped coordinate undergraduate participation at the National Convention for several years.

While still a District Governor, National President Christopher Mancusi appointed Brother Flagiello to the position of Vice President of Expansion, a role that he was very excited about and held until 2018. During his time in this office, over 15 entities were chartered (including the majority of the Epsilon series of chapters and a few reactivations) which helped the fraternity grow to 45 undergraduate entities.

In 2018, Brother Flagiello was elected National Vice President, and served two terms in that office. In 2020, he was elected as the National President of the Fraternity – the first brother of Gamma Rho Chapter, ever elected to this high office.

Brother Flagiello married his college sweetheart, Damarys; they currently live in Brooklyn, New York with their son Leonardo, where he is a Section Manager in Customer Operations at Consolidated Edison Company of New York.