Brothers throughout the world gather to celebrate precious and lasting memories of their college and ongoing experience with Alpha Phi Delta.   If you have something you would like to share with us, please click here to contact us!

University of Buffalo, Epsilon Chapter, 1958.
This 1958 photo of a group of Epsilon brothers.  Top Row:  Ray Paolini and Nate Bliss.  Bottom row, left Joe Oliverio, starting quarterback.  These 3 brothers played football for the University of Buffalo (Epsilon Chapter) and in 1958 won the "Lambert Cup".  They were subsequently invited to a "Bowl Bid".  The inviting committee stipulated that if they accepted they could not bring their 2 black players, one of them being Willie Evans, the starting back. Of course, they declined the bid.  This story made National Headlines at that time and in 2008 there was a 50 year reunion of that team which also made headline news with their story of the declined "Bowl Bid".

Third row:  Peter Barbara, son of the infamous Joseph Barbara who hosted the Appalachian meeting in 1957 in Binghamton, NY.  Peter went on to be a successful lawyer in Detroit, representing Jimmy Hoffa at one time.  He has since passed away. 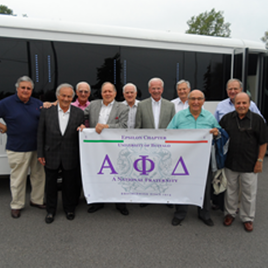 Recent reunion of Epsilon brothers. Associated story forthcoming ...
﻿﻿If you would like to support any of these efforts of the Alpha Phi Delta Foundation, you can mail a contribution to P.O.Box 23188,Pittsburgh, PA 15222, or click on the link below.   See the Omega Society if you would like to make a bequest.