See the bottom of this for more details about some of the scholarships. 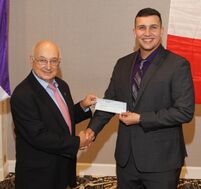 Anthony Carfang Award  ($5,000)     Established by the 36th National President and current Foundation Chairman.  He is the all-time leading financial donor to the Alpha Phi Delta Foundation.
Evan Fernandez
This outstanding student at Marist College (Delta Theta) is pursuing his Master’s in Public Administration.  He was the APD Outstanding Undergraduate in 2020 and is the recipient of numerous academic scholarships and awards. Evan is a former chapter president and Army ROTC company commander.  As the son of alumnus Alexis Fernandez John Jay College (Delta Epsilon), he was also president of the Criminal Justice Honor Society.  His department chairman describes him thusly: “He thrives in service and is not afraid to stand up for his beliefs”.  Evan represents the best of Alpha Phi Delta. 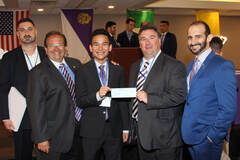 ​Stanley Raffa Award  ($2,500)     Established by the 30th National President and former Scholarship Chairman.
Aaron Kim
Aaron is pursuing an MBA in Accounting at Manhattan College (Beta Beta).  He was a Presidential Scholarship winner as well as a valedictorian nominee, while holding leadership roles in both the Honor and Accounting Societies.  Boasting a near perfect GPA of 3.95, Aaron also was an executive board member of his chapter.
Brooklyn Alumni Club Award  ($2,500)
Michael Beovich
This chapter president with an outstanding GPA of 3.6 at Pace University (Gamma Iota), is a repeat scholarship winner.  In addition, Michael holds numerous academic scholarships and is an aspiring accountant.  During the pandemic year he kept his chapter together with numerous Zoom events.

​John J. Hadgkiss Centennial Scholarship ($2,500)     Funded by Beta Rho alumnus John Hadgkiss, Scholarship Trustee.
John Nguyen
John is a repeat scholarship winner and sports a 3.8 GPA at St. Francis University (Beta Lambda).  He is an aspiring nurse anesthetist and former chapter president.  COVID hit his family’s business quite hard, but as one of only two seniors in this chapter, he had remained quite active mentoring younger brothers.

Anthony & Stella Barbieri Award  ($2,000)   Established by Brother Anthony & Rosina Barbieri in honor of his parents.
Robert Stevens
Sporting an incredible 3.9 GPA, Robert is a Presidential Scholar at Utica College (Beta Iota).  He is a repeat scholarship winner and is the lead volunteer at his local soup kitchen.  “He is an exceptional person”, says his commerce and media instructor. 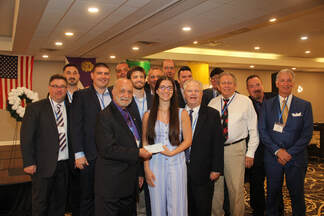 North Jersey Alumni Club Award  ($2,000)     Honoring Americo Faruolo, member of Beta Xi chapter and the NJAC.
Olivia Franki
Olivia attends Seton Hall University and has attained a 3.9 GPA as a double major in history and Italian.  She is president of the Italian Student Union and is the daughter of her proud father, Nicholas Franki, Past National President.  Olivia is a Presidential Scholar and a previous scholarship winner.

​Joseph and Janet Caldarella Family Award  ($1,500)   Established in recognition of the positive impact APD has had on their family, and  in memory of Salvatore Caldarella.
Skylar Patricia
Skylar attends Drew University and is the daughter of brother Richard Patricia from William Patterson University, (Gamma Nu).  She is a theater major with a perfect 4.0 GPA, and is a proud multiple scholarship winner.  She serves as the assistant musical director at the school.

Pittsburgh Alumni Club Award  ($1,500)
Jackson O’Connor
Jackson is chapter vice president at St. Francis University (Beta Lambda) and an exercise physiology major.  He is a repeat scholarship winner and an aspiring chiropractor with a 3.9 GPA

A. Joseph Creston Award  ($1,500)     Established by the 34th National President A. Joseph Creston.
Alexandra Hughes
Alexandra is the daughter of brother Michael Hughes (Beta Phi, Rowan University) and attends the University of South Carolina.  She is a nursing major with a perfect 4.0 GPA and has attained the Dean’s List and President’s List every semester. 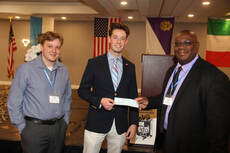 Long Island Alumni Club John Pasta Award  ($1,500)    Established by the LIAC in honor of the 7th Grand Consul.
Aiden Sweeney
As the current chapter president at Rowan University (Beta Phi), Aiden is a repeat scholarship winner and holder of eight academic awards and honors including the prestigious President’s List.  He is an education major with a 3.6 GPA.


Mancusi Family Award  ($1,500)     Created by 52nd National President Chris Mancusi to honor Alberto & Angelina Mancusi as well as their relatives in Ischia, Italy.
Justin Hong
At New York University (Theta Beta), Justin is an economics major with a 3.6 GPA.  He serves his chapter as president, is a community volunteer and hopes to work in the media and entertainment field upon graduation.

Fabrizio Family Award  ($1,500)     Established by Scholarship Trustee Paul Fabrizio and family.
Anthony Davis
Anthony is a pre-med major at Franciscan University of Steubenville (Beta Theta).  He is a repeat scholarship winner and the recipient of the Provost Scholarship.  Anthony is the chapter vice president and is described by his professor as having “exhibited success of the highest caliber”.


​Brother Camillus Casey Award  ($1,000)     Honoring former National Chaplain Bro. Camillus Casey
Casey Spencer
Attending Fairleigh Dickinson University, Casey is the nephew of brother Anthony Tomasello (Temple University, Beta Delta).  He is the chapter president of the Public Relations Student Society and maintains a 3.7 GPA.  Casey is the recipient of a University Honors Scholarship.
​
Felix Infausto Scholarship  ($1,000)     Established by his widow Clara Infausto in her will.  Bro. Infausto was inducted into Epsilon chapter in 1929.
Sergio Tlatenco
Sergio attended Rowan University (Beta Phi) and is beginning his Master’s in Healthcare Administration at Rutgers University.  He was a Rowan Scholar with a 3.7 GPA.

Lillian Anastasio Family Scholarship  ($1,000)     Established by her children, including Theta Beta alumnus and APD Scholarship Trustee Neil Anastasio.
Christina Bruno
The daughter of Theta Beta alumnus John Bruno (New York University), Christina attends St. John’s University and is a repeat scholarship winner.  She is an aspiring attorney and a government and political science major with a 3.8 GPA.  She is the winner of several academic scholarships and a member of Phi Eta Chi sorority.

Paul J Sciullo II Memorial Award   ($1,000)     An American hero and Psi brother, Paul was killed in the line of duty as a Pittsburgh police officer.
​Ben Bagbek
Ben is a repeat scholarship winner from Manhattan College (Beta Beta), where he plans a career in politics.  He has a double major in environmental economics and political science and is active in many campus activities.  Ben has received multiple academic scholarships.

​Military Scholarship  ($1,000)     Established by, and in honor of, the military veterans of Alpha Phi Delta.
Gabriel Ritter
Gabriel is a cyber psychology major at the New Jersey Institute of Technology (Beta Xi) and an aspiring FBI cyber forensic investigator.  He has served his chapter as president as well as pledge master.  ​
Vincent & James Muffoletto Award   ($1,000)     Established by the 29th National President and his son.
Ryan Mueller
Ryan is the chapter president at Centenary University (Epsilon Iota) and a criminal justice major.  He has a 3.6 GPA while serving as a mentor to new brothers.

Perciavalle Family Scholarship  ($1,000)    Created by Psi alumnus (Duquesne University) Frank Perciavalle who was one of the first scholarship winners in 1979.
Zach DiMeglio
Graduating with a 3.9 GPA, Zach is starting an MBA program and hopes to work in healthcare management.  At St. Joseph’s College (Epsilon Gamma) he appeared on the Dean’s List multiple times.

Panella Family Scholarship  ($1,000)     Established by late Brother Leon Panella and family.  Leon was a Scholarship Trustee and served as a Foundation Director.
Yaxiel Rodriguez
At LaSalle University, Yaxiel is a marketing and international business major with a 3.6 GPA.  He hopes to develop a career in these areas.  While involved in several campus activities, he has attained Dean’s List status multiple times.

Kaufman Family Scholarship  ($1,000)     Established by Larry (Beta Xi ’88), his son Harrison (Epsilon Lambda ’15), wife Laura and son Justin, to honor the impact APD brotherhood had on them.
Thomas Ocello
Thomas attends Ramapo College of New Jersey (Gamma Pi) and is a math major.  He plans a career in education and has a 3.5 GPA.  He serves as chapter president and is a Dean’s List honoree multiple times. 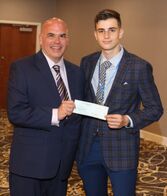 The Santo J. Barbarino Award   ($500)    Created by the Scholarship Trustees in honor of late trustee’s contributions to scholarship.  A past National President, he also served as District Governor and editor of the Kleos.   He was a beloved educator and this award is presented annually to an undergraduate brother who has successfully overcome significant challenges to his academic career.
Tyler Stanger, Beta Phi  (Rowan University)
​ 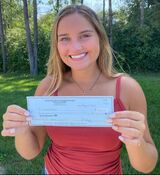 ​Rocco A. Sutera Scholarship  ($500)     Created by a gift in the will of Beta Eta (Brooklyn College) alumnus Rocco Sutera.  He served as Chairman of the Long Island Alumni Club John Pasta Award prior to its merger with the National Scholarship Fund.
Jonathan Deutsch,  Beta Beta  (Manhattan College)

Shipley Family Scholarship   ($500) Established by the Shipley family on the occasion of Calvin’s 50th anniversary as a brother.  Calvin is Psi ’71 and his son Chris, a previous scholarship winner, is Psi ‘99
Jarred Crystal, Epsilon Lambda  (University of New Haven)

Details / History of some of our Scholarships 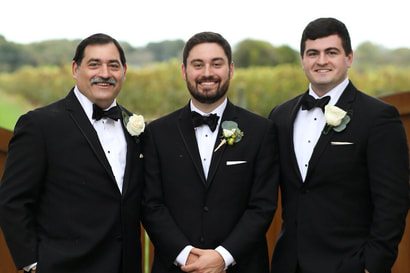 Joseph Rahtelli, Beta Beta 1982, (1983 Scholarship), graduated with a Chemical Engineering degree from Manhattan College.  While he was an undergraduate, Beta Beta received the Outstanding Chapter award and he received the National Outstanding Undergraduate award in 1985.  He has served many positions in the fraternity, most notably as National President (1990-1992).  He is currently serving his second term as a Director of the Foundation.  Joe and Donna have been married for 35 years.  Joe currently has two successful businesses, one in financial services and the other as a process automation engineering consultant.

Joseph Rahtelli II, Delta Theta 2007, (2008, 2009, 2010 Scholarships), graduated with a double major in Accounting and Finance from Marist College.  Delta Theta received the Outstanding Chapter award while he was Chapter President and he received the National Outstanding Undergraduate award in 2011.  He has served the fraternity as Asst. District Governor (2010-2015) and District Governor (2015-2018).  He is married to his college sweetheart, Kaitlyn.  He is a CPA, currently working for a hedge fund.

Michelle Rahtelli, (2013 Scholarship), graduated with a Criminal Justice degree from Marist College.  She went on to receive two master’s degrees in Elementary Education and Marriage & Family Therapy.  She is currently a marriage and family therapist who works with individuals and families who are impacted by struggles with mental health.

Matthew Rahtelli, Beta Beta 2014, (2017 Scholarship), graduated with a Computer Science degree from Marist College.  After pledging at Manhattan College, he transferred to Marist College and became part of the Delta Theta chapter.  Delta Theta received the Most Improved Chapter award while he was Chapter President and he received the National Outstanding Undergraduate award in 2018.  Since 2018 he has served the fraternity as Asst. District Governor.  After college, Matt enlisted in the U.S. Army Reserve as a Combat Engineer where he has earned the rank of Specialist.  He works at IBM in the field of cybersecurity.

The Rahtelli family has endowed a scholarship at the $20,000 level to benefit others.